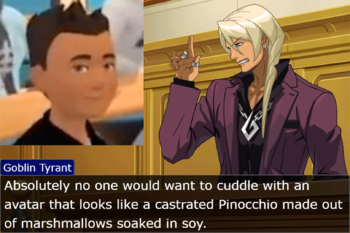 Calvin: What if somebody calls us a "pair o' pathetic peripatetics"?!
Hobbes: I've never heard of anybody taking the trouble to rhyme weird insults.
Calvin: But shouldn't we have a ready retort?
— Calvin and Hobbes
Advertisement:

Basically, it's all about insults which are... creative. Not so much like You Fight Like a Cow. These are more serious, but at the same time almost poetic, and often Sophisticated as Hell. Like this Arabian insult:

"You son of a rabid bitch! Grandson of a stinking jackal! Great-grandson of a plucked vulture!"

"A thousand dicks in your religion!"

May be caused by being from a foreign culture like the example. If both opponents do this, Volleying Insults is likely to turn into a verbal Lensman Arms Race.

Compare Cut His Heart Out with a Spoon. Contrast Big, Stupid Doodoo-Head.