Literature / The Enchantress of Florence 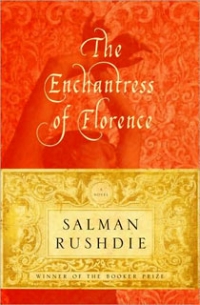 "In the beginning, there were three friends, Niccolò 'il Machia', Agostino Vespucci, and Antonino Argalia."
Advertisement:

The Enchantress of Florence (2008) is the ninth novel of Salman Rushdie, which mixes historical facts and fantastical elements without shame or mercy. It is mostly seen as a work of Magic Realism, but with quite a dose of fantasy element. Rushdie is particularly proud of the research he's done for the novel's writing, and attached half a dozen pages of references at the end of the book—not bad for a work of fiction.

At the heights of the Mughal Empire of India, a blond traveller with a strange overcoat and, seemingly, magical prowess, came to visit Akbar the Great with a secret only a king may hear. He claimed to be under the protection of the greatest enchantress in the world: the titular enchantres of Florence. Strange things happened along the way.

The Echantress of Florence provides examples of: