Calling Me a Logarithm 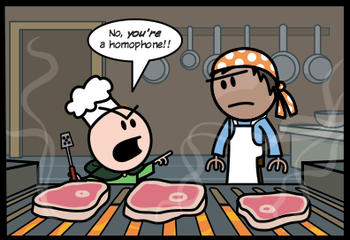 He's planning to fight a vampire.
"I acknowledge freely that I have had hard feelings against Mr. Ballou for abusing me and calling me a logarithm, which is a thing I do not know what, but no doubt a thing considered disgraceful and unbecoming in America..."
— Ollendorf, Roughing It
Advertisement:

A Comedy Trope about people being offended by words they don't know; for example, assuming that "logarithm" is a racial slur and not a mathematical function

This is often, but not always, a case of Compliment Backfire. See also Personal Dictionary for another way to take an unfamiliar word, invent a meaning, and assume it's the one everybody uses, and You Keep Using That Word, when a character calls out another on their misuse of words.

Pretty much the inverse of Insult Backfire. Contrast Malaproper. Particularly unfortunate choices of words can be Mistaken for Racist. If they're afraid instead of offended, then you get Scary Science Words.