Film / After the Thin Man 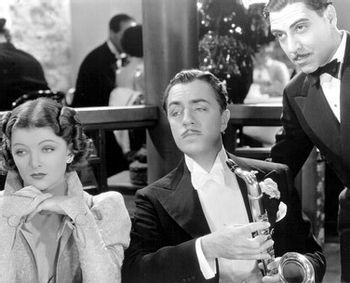 Nick Charles in his natural environment
"Come on, let's get something to eat. I'm thirsty."
— Nick Charles
Advertisement:

After the Thin Man is a 1936 mystery film directed by W. S. Van Dyke. It is a sequel to the 1934 smash hit The Thin Man, and the second of an eventual six films in the "Thin Man" series.

Nick and Nora Charles (William Powell and Myrna Loy) come back home to San Francisco after the events of the first movie, just in time to see in the new year. Nick and Nora want to rest and relax, but they are invited to visit Nora's family—much to Nick's displeasure as Nora's family can't stand him. While they are visiting, Nora's cousin Selma, on the verge of hysterics, begs them to find her husband Robert, who has been missing for days. They do so, only to find that Robert is a complete scumbag who has a mistress, and is also a Gold Digger who married Selma for her money. Robert accepts a $25,000 payment from Selma's ex-boyfriend David in order to go away forever, but shortly after taking the money, and moments after the stroke of midnight on New Year's, he is shot to death. Nick and Nora then find themselves in another mystery when suspicion falls on Selma and Nora prevails on her husband to find out who really did it.

After the Thin Man is made more interesting by the presence of a 28-year-old James Stewart, billed third, playing David the hopeful ex-boyfriend. Stewart had made his film debut just one year before and this was one of his first big parts. He would play supporting roles for MGM for the next couple of years before hitting it big in 1938 with You Can't Take It With You. The role he plays here is a good example of Early-Installment Weirdness.