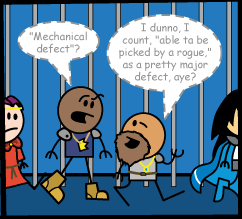 The five of us never left our cells. That is, everybody but me snuck out.
"When I use a word," Humpty Dumpty said, in a rather scornful tone, "it means just what I choose it to mean — neither more nor less."
— Through the Looking-Glass, and What Alice Found There
Advertisement:

Pretending that a word means something it does not; not in an attempt to help a language evolve, but in a Last Stand defending your words and your honor!

Say you're trying to convince people on a message board that a politician you don't like is a fascist (this could apply to just about any major political party). They aren't buying it. Well, the dictionary is irrefutable, so you look up fascism.

Damn it! This politician's views don't fit the definition of fascism at all!

Wait... That's just their definition of fascism, not yours. Of course, it's the label of fascism that is bad, and not the actual definition, so you just make the label apply and make everyone believe you. And maybe if you do it for long enough, it will catch on and they'll fix the dictionary!

Ways to do this are:

Naturally, making this one’s main argument is among the dirtiest of social tricks, since it all but forces your interlocutor to accept your strawman if they want to converse with you at all.

That said, Tropes Are Tools still applies, and the dictionary meaning of words can and do change over time — many dictionaries now include some variation on "derogatory term for a disliked politician/political group seen as dictatorial" as one definition of fascism, for instance. (Dictionaries, we should remember, simply record the ways words are commonly used, not necessarily the ways any prescriptivist groups think they "should" be used.) Attempting to create a new meaning by yourself, however, is a good way to prove you have Delusions of Eloquence.

Compare Malaproper, Newspeak, Implausible Deniability, Chewbacca Defense, No True Scotsman, Metaphorically True, and Unusual Euphemism. Not to be confused with Neologism which is making up words to add to current dictionaries. Twisting the Words is when someone applies this trope to a word someone else used, and Separated by a Common Language and Did Not Do the Bloody Research is when they are using the word correctly — with a different dictionary.

Contrast Accidental Innuendo, and Unfortunate Implications when someone uses a word strictly by the dictionary definition ignoring important colloquial meanings, Jive Turkey and Totally Radical for when dictionaries finally catch up with past vernacular a few years late, Have a Gay Old Time and Hilarity Ensues when the alternate slang meaning becomes the primary meaning, and Get Thee to a Nunnery occurs when a slang meaning is lost to time.

The antithesis of this trope is when someone observes, "You Keep Using That Word..."

When someone literally makes up an actual dictionary for their personal amusement or art, that's Conlang or Perfectly Cromulent Word.