Literature / The Unbearable Lightness of Being 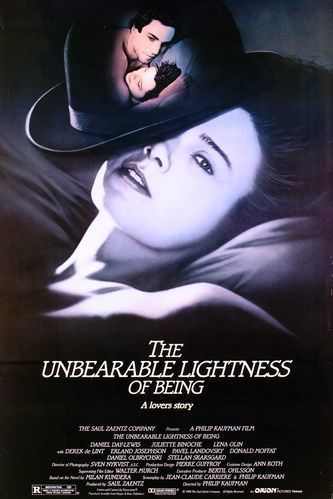 The Unbearable Lightness of Being (Czech: Nesnesitelná lehkost bytí) is a 1984 novel by Milan Kundera. It takes place mainly in Prague in the late 1960s and early 1970s, with the Prague Spring

and the Warsaw Pact invasion of Czechoslovakia

Tomáš, a surgeon, and Tereza, a photographer, are a marriage of Czech intellectuals that live a bohemian lifestyle. Tomáš is a womanizer who considers sex and love to be distinct entities: he has sex with many women but loves only Tereza, and he sees no contradiction between these two positions. Things get even more complicated when Tomáš meets Sabina, a woman craving for that intellectual bohemian lifestyle, and they cohabit with Tereza's knowledge.

The novel was adapted into a film in 1988, directed by Philip Kaufman and starring Daniel Day-Lewis as Tomáš, Juliette Binoche as Tereza, and Lena Olin as Sabina.

The novel and its film adaptation contain examples of:

Alternative Title(s): The Unbearable Lightness Of Being