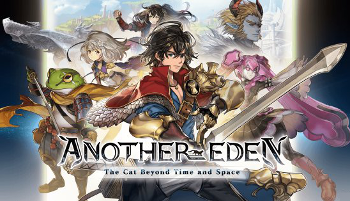 "Well, I guess...
It's time to set out on a journey
across time and space
to save our lost future.
Before the darkness of time falls upon us all..."
Advertisement:

Another Eden: The Cat Beyond Time and Space is a free-to-play Eastern RPG for mobile.

Aldo lives a relatively peaceful life as a town guard in Baruoki, until his sister, Feinne, is captured by the king of the beastfolk, and his failed attempt to rescue her launches him several years into the future. Aldo finds himself on a time-traveling adventure to save the world before the fabric of space-time is completely torn asunder.

The game is an attempt to create a pure J/RPG experience on mobile platforms, with an emphasis on plot and a de-emphasis on Revenue-Enhancing Devices. It shares some creators and themes with Chrono Trigger, as well as its sequel Chrono Cross. The latter's influence is most visible in the game's non-linear plot. Character-focused Side Quests are only unlocked when you actually gain access to that character... and while some of them are handed to you by the main plot, others are only available via the "Gallery of Dreams" gacha. The gacha itself is fueled by "Chronos Stones," the game's premium currency, which can be earned by Level Grinding the rather comprehensive Achievement System.

, with a Nintendo Switch port in the works. A PC port for the global version is available starting from March 31, 2021 through Steam.