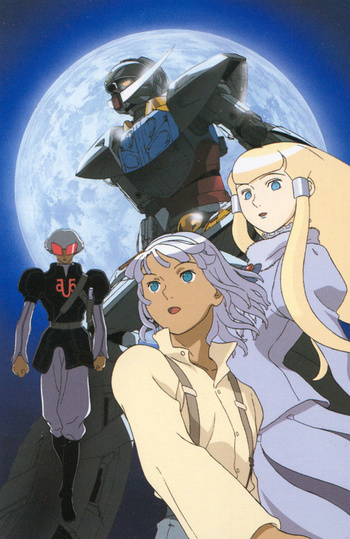 Turn A Turn! Turn A Turn! Turn AAAAAA!
The white wings of moon butterflies
Flicker down the streets of the city,
Blushing into silence the useless wicks of sound-lanterns in the hands of girls.
—H. P. Lovecraft, Poetry of the Gods.
Advertisement:

An Alternate Universe of the Gundam meta-series. Actually, it is THE Distant Finale to the meta-series.

In the Correct Century, the people of Earth are living in a world roughly at the turn of the 20th century. What they do not know, however, is that they are not the first incarnation of mankind. Far in the past, there were humans living on the moon who, after a great catastrophe, were forced to go into cryo-stasis and await the time when it is safe to return to the Earth. In the meantime, they occasionally send scouts to the Earth to see if it has returned to a state where people can live on its surface once more. Among these scouts is a young boy named Loran Cehack.

At the start of the series, the people of the moon (descriptively dubbed "The Moonrace") decide that they and their superior technology wish to return to the open air and full gravity of Earth. This, understandably, leads to some confrontation with the people already there. Loran, who had been living on Earth a few years ahead of time, has grown attached to the people there and, after Falling into the Cockpit of a mobile suit that has been buried in the earth for millennia, proceeds to defend the Kingdom of Bostonia as tensions build between Earth and the Moonrace, and the threat of war spirals ever higher.

, get it? So this is not to be confused with 'how you turn (around) a Gundam') premiered in Japan in 1999. It's notable as the last original Gundam work by creator Yoshiyuki Tomino (before he came back for Gundam: Reconguista in G, itself mentioned as taking place at some point after the Universal Century), his first outside the Universal Century timeline begun by the original series, and arguably one of his best efforts. It also came after he finally won his years-long battle with depression, thus rather stunningly averting his Kill 'Em All reputation. It's also notable for its lead mechanical designer being Syd Mead, the renowned and influential neo-futurism concept artist who also designed for works such as Blade Runner, Johnny Mnemonic, and TRON.

After years of No Export for You, Bandai Entertainment announced that it would be licensed for a Fall 2011 release, which was confirmed at Comic-Con 2010. After years of back-and-forth involving Bandai's withdrawal from the US market entirely and some re-negotiating of licenses, Turn A is finally available in English subtitles from the Right Stuf anime web-store as of Summer 2015. The series' characters are also represented in Dynasty Warriors: Gundam (which is the only place they are voiced in English).