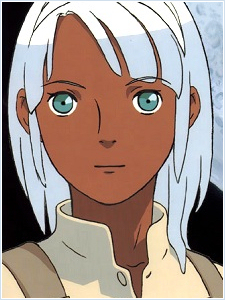 A young boy from the Moonrace who was on a mission to scout Earth, along with Keith and Fran Doll. The three split up to explore, and Loran was first attacked by wolves, only to be saved by the local lord, then nearly drowned before being saved by Kihel and Sochie Heim, daughters of a prominent local family. After being hired as a driver and mechanic by the household, Loran acclimates to Earth living and concludes that it is time for the Moonrace to return. The Moonrace coincidentally does come back while Loran is participating in a coming-of-age ceremony (while nude, incidentally), but they attack Nocis City and Vicinity Town immediately. This awakens the "White Doll" statue on the moutain—which turns out to be a mobile suit of immense power, the Turn A Gundam. 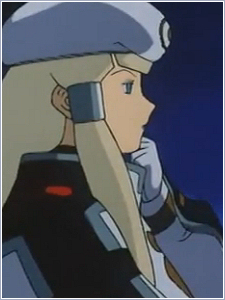 The Leader of the Moonrace. Once scouts determine that the Earth is livable again, she brings her forces to Earth to recolonize it, a goal that turns out to be far more dangerous and complicated than she thought. Over the course of the story, she re-evaluates her intentions and duty.
Harry Ord 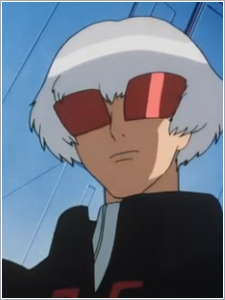 The leader of Queen Dianna's Royal Guard, easily recognizable by his mask-like red sunglasses. He's an expert pilot, unfailingly loyal to his Queen, and very sharp. He's quick to react to any insult to Dianna, but outside of that he's clear-headed and able to work with the enemy at need. 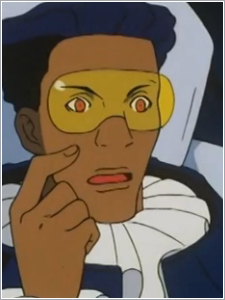 Dianna's Chancellor and the man in charge of the cryogenic stasis chambers that house ten million of the Moonrace. While Dianna is pursuing her agenda on Earth, Agrippa declares military law and gradually takes control of the Moon.
Gym Ghingnham 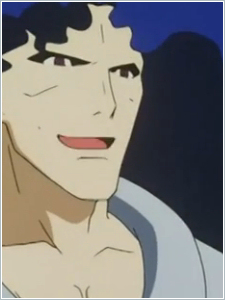 A leader of one of the Moon's political factions. Gym Ghingnham has spent his life playing war games and is eager to put his talents to use in the war against the Earthrace. Although he initially wears a facade of cooperativeness, he is intent on pursuing his own agenda: wresting control from Dianna and becoming the warlord leader of the Moonrace. He discovers the Turn X and becomes its pilot to further this end.

Agrippa Maintainer's secretary and chief agent on Earth. Callous, calculating, and quite willing to sacrifice anyone he meets for his goals.
Advertisement:
Teteth Halleh

An agent of the Moonrace. She's first encountered as Will Game's girlfriend and works by maneuvering the people around her (particularly men) or plain force, and holds a burning grudge against Queen Dianna.
Phil Ackman

The leader of Dianna Counter's ground and mobile suit troops. Phil is a militaristic man who views the Earthrace as primitive. 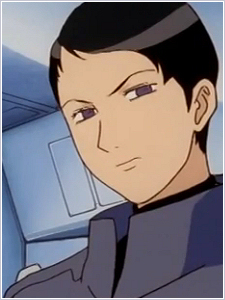 A lieutenant in Dianna Counter and Phil's immediate subordinate.. She is impatient and easily irritated by the obstacles the Militia throws in her path. She is tasked with defeating the White Doll at first, which proves to be no easy task.

The Rhett Team are a group of mobile suit pilots whose ancestors were sent to Earth in generations past to prepare for its recolonization. They view the moon and Dianna with a religious reverence, but they're disdained by Dianna Counter for the time they've lived on Earth and their unruly way of fighting.

Merrybell is an aide to Gym Ghignham. She oversees the maintenance of his mobile suits and assists in excavating the Mountain Cycle on the Moon. She shares his enthusiasm for battle and violence.

An obese pilot in the Ghignham Fleet. 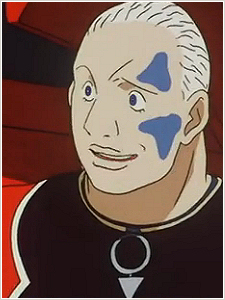 A convict and dangerously skilled pilot who is brought to Earth by Dianna Counter in order to counteract the White Doll. He is by far the oldest character (chronologically) in the show, being well over 2000, but due to brain damage caused by centuries of being frozen he's unstable and childish, and obsessed with putting a stop to the White Doll, which he calls the "Gundam", a name he remembers from his days as a soldier of the OZ organization. 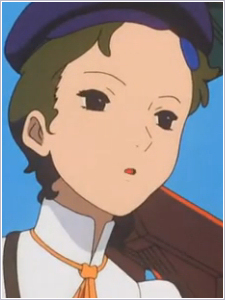 The second member of the Moonrace scout team sent to the Earth. She finds a job at a printing press and moves onto journalism from there. She's instrumental in publicizing Loran as "Laura Rolla," but her photographs and articles become problematic for the Luizianna and Inglessa governments as the war goes on.
Keith Laijee

The third member of the scout team sent from the Moon. Keith becomes a baker and has absolutely no interest in fighting whatsoever, but the necessity for provisions makes his business a huge success as he sells his bread to both factions.
Bruno & Jacop

A pair of soldiers sent to assist Corin Nander. Although troublesome, they really aren't all that threatening—they're more afraid of their boss than anything else and most of their plans end up derailed until they end up on the Militia side largely by accident and become bridge pilots on the Gallop and then Willgame.

A descendant of a Moonrace man who lived or rather, was exiled on Earth. Although he's got a house and a farm of his own, he dreams of living on the moon and will do anything to get there, no matter how dangerous.

An impassive, laid-back Moonrace engineer who is recruited by the Earth Militia to help with their salvaged technology. 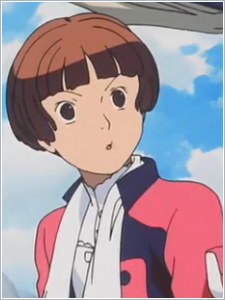 Sochie is the headstrong and somewhat tomboyish younger daughter of the Heim family. She's training as an airplane pilot for the Militia when the war begins and develops a hatred towards all of the Moonrace for killing her father and driving her mother insane. She becomes a Kapool pilot and is eager to rush into battle regardless of the odds. 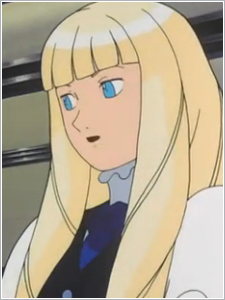 The Heim family's older daughter. Although more feminine than Sochie, she still resists the idea of becoming a lady of society and instead wants to go out into the world to do something useful. Her striking resemblance to Queen Dianna is noticed early on. When they switch clothing on a whim, it sets in motion a complicated series of events that changes both of them.
Miashei Kune 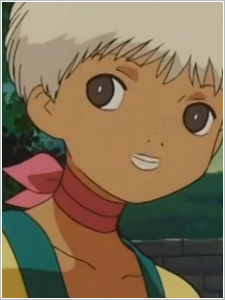 The daughter of Ladderum Kune, the Militia's biplane expert and chief mechanic. Miashei is Sochie's best friend and becomes a Kapool pilot alongside her when the Militia digs up their own mobile dolls. Although she's plenty eager to fight, she has a much cooler head. 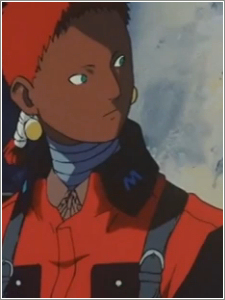 Sid Munzer's assistant. Joseph was born in Adeska and retains a few accouterments of that in his appearance. He helps to train Militia pilots in the use of mobile dolls and often wears a stern expression, although he's a good-natured fellow at heart.

The elderly head of Nocis' excavation crew. He switches from searching for ore to searching for Mobile Dolls.
Guin Sard Rhineford 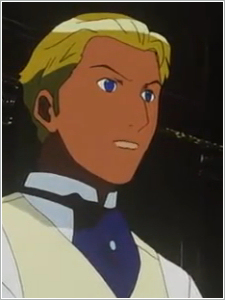 The ruler of Inglessa and heir to Bostonia Castle. Guin made a great deal of money off of mining and technology, and had managed to contact the Moonrace before the series began. Although things didn't go how he wished, his political savvy and intelligence keeps things from turning into a conquest by the Moonrace. He also has strong influence with the Militia, although he's not in complete control over their course of action.
Colonel Michael Gern

The leader of Inglessa's militia. Michael is a career soldier who has to quickly adapt to the giant technology gap between the Militia and Dianna Counter. His loyalty, first and foremost, is to Inglessa and the Earthrace as a whole and he'll do whatever he feels necessary for that end.
Lily Borjanno 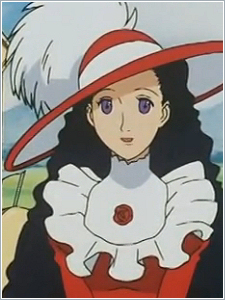 The daughter of Luzianna's ruler, and supposed fiancee of Guin Sard Rhineford. Lily steps into the mess that is the Militia-Dianna Counter conflict after the razing of Nocis, when Guin asks her to be a spy for him during negotiations. Although she's playful and sometimes petty, she has a keen sense for politics and remains involved for the rest of the series.
Gavane Gooney

The leader of the Suicide Squad, the of Ace Pilots of the Luzianna militia. Gavane is eager to show his prowess in battle, but he's a skilled soldier and pilot. He's very impressed by Sochie and begins courting her almost as soon as they meet.