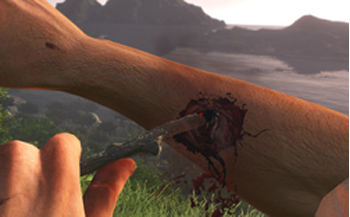 Sticking a twig from the ground into your forearm to dig out a bullet. Don't Try This at Home... in fact, don't try this ever.
"This hospital works under the same logic as a kid who flips over a couch cushion because he spilled grape juice on it!"
— The Cinema Snob, reviewing Ilsa, Harem Keeper of the Oil Sheiks
Advertisement:

Fictional first aid is often applied in ways that would be useless or outright counterproductive in Real Life. There's the reason of safety, as during CPR or the Heimlich maneuver organs in the way are considered to be expendable. There's the practical reason that the audience might prefer their unconsciousness and revival scene without it turning into "Fun Things To Do With Vomit". There's the dramatic reason that a character may not actually know first aid or the work may be a period piece where medical knowledge is less advanced.

Qualifying as Worst Aid will usually mean that the work is attempting to depict useful medical care and it is done badly or counterproductively for reasons having nothing to do with actor safety (see CPR). It becomes egregious when the depiction is of a doctor or other expert doing something you should learn not to do in First Aid class.

Spotting or MSTing such depictions is good for a lark. Unfortunately, Reality Is Unrealistic, so they are likely not harmless and it might be a good idea for a media fiend to take a first aid course. Depending on your country, any mid-sized or larger city should offer an initial 2-4 class.

Keep in mind, "mistakes" like bending the elbows while doing otherwise-proper CPR are not Worst Aid per se. As alluded to at the top, really doing CPR on someone that does not need it can get them seriously hurt. In fact, the ultimate aversion of CPR Worst Aid is having someone break a patient's sternum doing CPR on them; also, performing a real CPR on a person with more or less normal, regular heartbeat is likely to trigger a severe arrhythmia, requiring a defib to get it back right. Bending the elbows is a necessary straight play when simulating it on a live, breathing actor, so it can be considered one of the Acceptable Breaks from Reality.

See also CPR: Clean, Pretty, Reliable, Death by Ambulance, Magical Defibrillator, Suck Out the Poison, We Have to Get the Bullet Out!, Shot to the Heart, Flatline, Harmful Healing, Heal It with Fire, Meatgrinder Surgery, Lodged Blade Removal, and Artistic License – Medicine; compare Annoying Arrows.