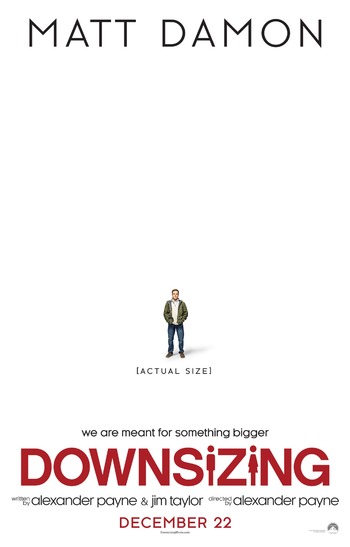 "Why did I downsize? So that I could be here right now. I finally have a chance to do something that matters!"
Dave Johnson: Downsizing takes the pressure right off.
Paul Safranek: Plus you're really making a difference.
Dave: You mean all that crap about saving the planet?
Paul: Yeah.
Dave: Downsizing is about saving yourself. We live like kings. We got the best houses, the best restaurants. Cheesecake Factory, we got three of them.
Advertisement:

As a solution to over-population, Norwegian scientists discover how to shrink humans to 5 inches (13 centimeters) tall and propose a 200-year global transition from big to small. People soon realize how much further money goes in a miniaturized world, and with the promise of a better life, everyman Paul Safranek (Damon) decides to abandon his stressed life in Omaha in order to become small and move to a new downsized community — a choice that triggers life-changing adventures.