Literature / The Haunting of Tram Car 015 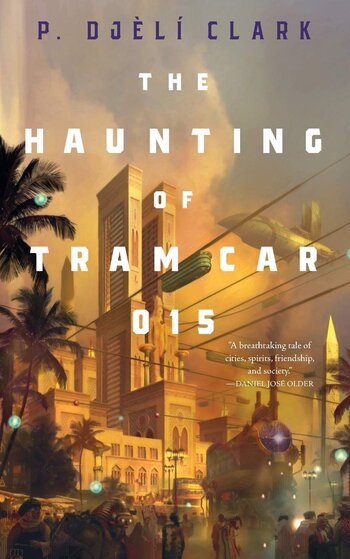 A haunted tram car? Or something a little more... off the rails?
“Good morning, unknown being,” he said in loud slow words, holding up his identification. “I am Agent Onsi and this is Agent Hamed of the Ministry of Alchemy, Enchantments, and Supernatural Entities. We hereby inform you that you are in breach of several regulations governing paranormal persons and sentient creatures, beginning with Article 273 of the criminal code which forbids trespass and inhabitation of public property owned by the State, Article 275 on acts of terrifying and intimidation of citizens…”
— Chapter 1, Agent Onsi Youssef performs a Ministry Standard Greeting on an unidentified spirit
Advertisement:

The Haunting of Tram Car 015 is a 2019 novella written by P. Djèlí Clark, taking place in the same Alternate History Myth Punk version of Egypt as his previously published A Dead Djinn in Cairo.

The place is Cairo, the time is 1912, and the case is the apparent haunting of an aerial tram car. As the city simmers beneath the summer sun and the nation readies for a vote that could grant suffrage to half the population, two men are deployed to dispatch whatever spirit, spook, or specter is interfering with the public transportation system: Agent Hamed Nasr and his new partner Agent Onsi Youssef of the Ministry of Alchemy, Enchantments and Supernatural Entities.

But nothing is quite as it seems, and soon the case forces Agents Hamed and Onsi to explore a side of Cairo stirring with suffragettes, secret societies, smuggling rings, and sentient automatons as they a race against time to protect the city from an unknown supernatural force.

Chapter 1 of the novella is currently available as a preview

Tropes Found in The Haunting of Tram Car 015: