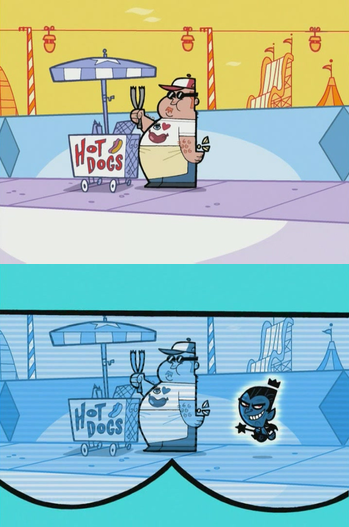 "Put the glasses on! PUT 'EM ON!"
— Roddy Piper, They Live!
Advertisement:

The world is the way it is. Or so they would have you believe but there is something more, something underneath the thin skin of this world, something which can't be normally seen by human eyes. How can you see it then? Why, with special glasses, of course.

These can come in a variety of forms: regular sunglasses, X-ray specs ordered from the back of a comic book, hagstones, or special amulets. You can see By the Eyes of the Blind, those Invisible to Normals, and the Masquerade. You've broken the Weirdness Censor on your eyes.

Now, the only question is: Is this a good thing?

Despite what the title may imply, this has nothing to do with X-Ray Vision. Compare with the Goggles Do Something Unusual. A Sub-Trope of True Sight and See the Invisible.