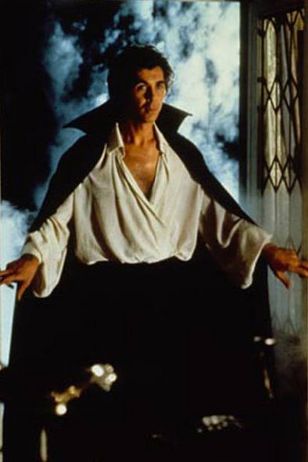 Universal's second screen version of Dracula, directed by John Badham and released in 1979, was adapted from the same stage play that its predecessor was based upon, in the wake of a successful Broadway revival. The star of that production, Frank Langella, reprises his role as Dracula, while Laurence Olivier as Abraham Van Helsing and Donald Pleasence as Dr. Seward head up the supporting cast.

In 1913, a ship (with its entire crew dead) arrives at Whitby in North Yorkshire, England. With it arrives the Romanian Count Dracula, who has bought the disused Carfax Abbey, located near Dr. Seward's sanitarium. Dracula sets upon furthering his kind. First, he seduces and turns Mina Van Helsing (Jan Francis), a guest in the Seward home, and then — more romantically — pursues Lucy Seward (Kate Nelligan). When Professor Abraham Van Helsing arrives in Whitby upon word of Mina's sudden, mysterious death, he suspects that a vampire is involved and begins an investigation into Dracula's true nature... but is it already too late to save Lucy's soul?