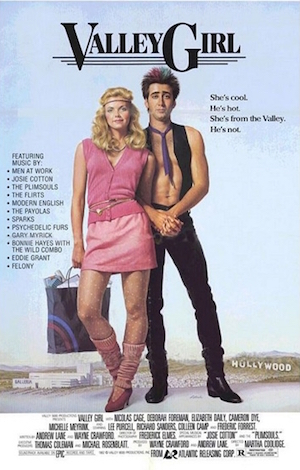 "This is the story of Randy and Julie. The way they come together and the people who try to pull them apart. Julie's cool. Randy's hot. She's from the Valley. He's...not!"
— Trailer for the film
Advertisement:

Julie (Foreman) is, like, so over her preppy boyfriend, she dumps him on the escalator at the Galleria. When she meets punker Randy (Cage), her eyes practically bug out because she thinks he's sexy, even though he makes her friends gag! Even if Randy's ready to stop the world and melt with her, though, can Julie risk losing her friends and her super-popularity at school just to be with him?

This film was made to cash in on the "Valley girl" fad launched by Frank Zappa's hit song of the same name. True love is only a zip code away!

In 2020, this film got a Jukebox Musical remake by Orion Classics.