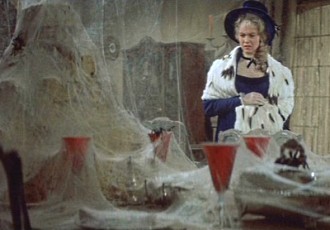 Aren't you glad you dressed up to visit?
"Certainly, he didn't expect to come home and find a clear inch of dust."
— Albus Dumbledore, Harry Potter and the Half-Blood Prince
Advertisement:

It's a place so dusty, the cobwebs are basically measured in depth. If there aren't cobwebs, everything has a layer of gray from all the dust anyway.

Heck, the only thing keeping dust from getting kicked up, everywhere someone walks around, is that it would be difficult to film (and be very uncomfortable for the cast and crew).

On the gritty end of Sliding Scale of Shiny Versus Gritty. One likely site for a Bat Scare.

A Sub-Trope of Scenery Gorn.

Compare Cobweb Jungle, Cobweb of Disuse, Trash of the Titans.