Trash of the Titans 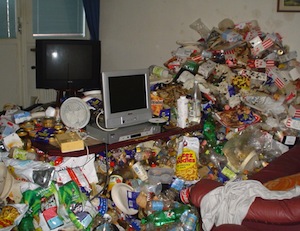 Someone's Fatal Flaw is that they are messy. It's not as simple as leaving the occasional book on the floor or not cleaning up a minor spill. No, these people go all the way and create environments that should not be able to sustain human life. Trash is overflowing from garbage bags like vomit from the mouths of bloated black slugs, the air is a sickly brown color, primitive lifeforms begin to develop under the sink and don't even think about opening the fridge, but don't worry! They have A System.™

Alternately, they might not just see it as trash at all, and are keeping everything around for some theoretical future use. The technical term for this is Disposophobia

(the fear of throwing anything away) otherwise known as "compulsive hoarding". People who suffer from this condition basically think "I might need it later" to a life-threatening degree. (Anyone who's played an RPG might relate). If they don't have the phobia they could be too lazy/overworked/sick (as in physically ill or disabled) to spend the umpteen hours needed to get the place together. Disabilities like compulsive hoarding are the number one cause, but this is rarely presented as a serious problem in fiction. Either way, this trope is usually Played for Laughs.

As the trash piles up, expect other tenants to start moving in. Mold and common vermin — roaches, ants, rats at worst — are the most realistic, and most expected, result of so much trash piling up. In more exaggerated or comedic examples, the mountains of refuse may hold cockroach civilizations, Living Dust Bunnies, exotic fungi, and alien lifeforms created from unspeakable reactions in the refuse. Any and all of these things may well be on their way to higher intelligence or have designs on the wider world.

Related to Mess of Woe. Compare Men Can't Keep House, The Pig-Pen, It Came from the Fridge, Down in the Dumps. For the opposite behavior, see Neat Freak.

Guess what... it's Truth in Television, as you can see in this site!