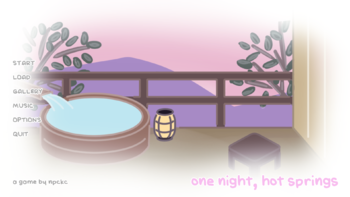 is a short Ren'Py-based Visual Novel made in 2018 by npckc for the Trans Gal Jam.
Advertisement:

Haru, a young and very introverted girl, gets a call from her friend Manami. It's the latter's birthday, so she decided to invite the former for a nice, all-girls hot springs trip, along with her other pal Erika. After much insistence from Manami, Haru reluctantly accepts the offer. There's only one problem...

In 2019, npckc released a sequel, called last day of spring. It follows Erika's point of view as she tries to organise Haru's upcoming birthday party. It can be found here

The third game in the series, spring leaves no flowers

, was released on November 30th, 2019. The protagonist here is Manami: The day after celebrating Erika's birthday, she notices both Haru and Erika acting strangely towards each other, and tries to understand why.

The trilogy has seen a Compilation Rerelease titled "A Year of Springs", which features an additional ending exclusive to the compilation.

The spring series contain examples of: