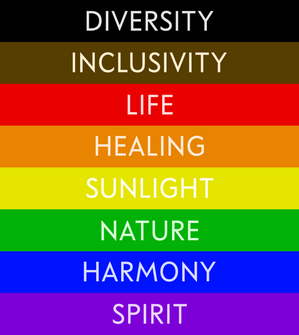 The power of color.
The LGBTQ+ rainbow flag was created in 1978 as a symbol of queer pride. Since then, it's become a recognizable symbol of the LGBTQ+ community, and several other flags (such as the orange, white, and pink lesbian flag, the pink, purple, and blue bisexual flag, the blue, pink, and white transgender flag, the black, grey, white, and purple asexual flag, and several others) have followed in representing the specific communities in the non-heterosexual continuum. Historically, pink and lavender have also been used as queer color symbols.
Advertisement:

In fiction, a queer character will often be associated with their pride flag colors to emphasize their sexuality or gender identity. These colors can show up in their physical appearance or outfits (which often shows they are proud to be themselves) or in more subtle cues like cinematography, lighting, or a specific Color Wash. For example, the trend of 'bisexual lighting', where bi characters are lit with blue, purple, and pink, arose in The New '10s. This can be a meaningful way to express LGBT+ pride. Compare Queer Flowers, when different flower species are used to symbolize queer love, and Rainbow Motif.

Note: Please limit examples to characters confirmed in the story or by Word of Gay to be queer.