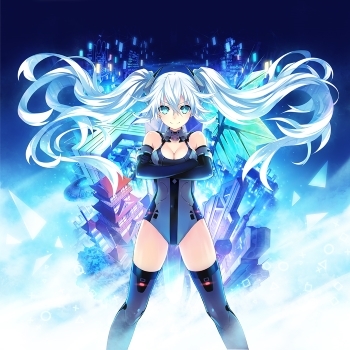 Now it's Noire's time to shine!
"I blame... the designers... for not making me the lead."
— Neptune, after Noire defeats her, Blanc, and Vert.
Advertisement:

The second spin-off game in the Neptunia series, Hyperdevotion Noire: Goddess Black Heart (Chō Megami Shinkō Noire Geki-Shin Black Heart) is a game for the PlayStation Vita focused on Noire. Noire was chosen because she won a poll in 2011 to determine a spin-off protagonist. This time, it's a Strategy RPG developed by Sting Entertainment (best known for its Dept. Heaven series, and who previously collaborated with IF on Generation of Chaos 6 in 2012).

In the Alternate Continuity of Gamarket, Noire is a few steps shy of unifying the whole world under her banner. But things suddenly go wrong when Arfoire Eno tricks Noire into making her shares' energy dissipate. Suddenly, all of her subordinates, the generals, have broken ties with the CPUs and are fighting amongst themselves.

As she starts setting things right, she learns that many of her generals were never her friends like she thought they were, but rather saw things as having begrudgingly become her pawns. In response to this, Noire gets a second objective: be friends with her generals for real this time.

The game was released for the Playstation Vita on May 29, 2014, in Japan, in North America and Europe by Idea Factory International in February 2015, with a Steam release on April 26, 2016.

These tropes only do everything: