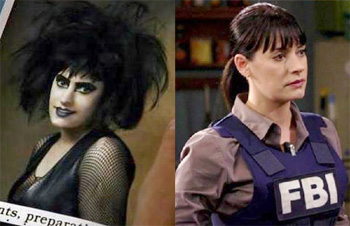 "I really used to be a bad girl
I got gang-banged in the bathroom at my high school prom
Yes, I used to be a real wild child
But now I am a Volvo-driving soccer mom."
— Everclear, "Volvo Driving Soccer Mom"
Advertisement:

An older character, who is seen as stodgy, virtuous, or law-abiding. We eventually learn that, in their youth, they were rather less so.

When the older character is a mentor figure to the protagonist, The Reveal that they fit this trope can sometimes be part of the process of turning them into a Cool Old Guy. It's also related to Mysterious Past, though there doesn't have to be any mystery involved. Rule-Abiding Rebel or Bourgeois Bohemian can be the result if the character tries to have it both ways. This can lead to a case of Generation Xerox if the former rebel now has rebel kids of their own. Overcompensating for their rebellious past by being stern with their kids may increase the likelihood of their kids turning out just like them while increasing the children's shock when they find out what Mom and/or Dad were like at their age.

People who were rebellious in their youth — especially if their actions included a strong sexual element — are said to have been "sowing their wild oats." (This is also said in the present tense of older philanderers.) The etymology of the phrase is explained here.

On a few rare occasions, a former teen rebel was actually a closet rebel who was Living a Double Life. An extreme example might be The Fundamentalist kid you knew in high school and/or college, the one who always complained about all the other believers who didn't live exactly by their strict interpretation of As the Good Book Says.... Then — sometimes decades later — the truth comes out. That obnoxious bible-thumper had actually gone through high school and/or college regularly cheating, lying, stealing and/or screwing Anything That Moves. Of course, such people don't exist in a vacuum. Somebody — a cohort or an adversary — knew the truth all along, but their warnings usually went unheeded. The Reveal allows this person to say "I Knew It!" or "I Warned You" to all the doubters.

Definitely Truth in Television. Contrast with Used to Be a Sweet Kid where a villainous or otherwise unpleasant character is shown to be much nicer and polite as a child. Compare Parental Hypocrisy. Teens Are Monsters is often a strong factor of why the character used to be a teen rebel, which can lead to a Teenage Wasteland. See also Retired Outlaw.

Mother: What kind of behavior is that? When I was your age, I always stayed at home in the evening.
Daughter: Naturally you did. I was eight months old already by then.
Old Hippie: I used to do drugs in the '70s, now I don't care what the temperature is.

Through some old security tapes, the cast learns that Ron the Rent-a-Cop used to be just as big a troublemaker as Jonesy.

Through some old security tapes, the cast learns that Ron the Rent-a-Cop used to be just as big a troublemaker as Jonesy.