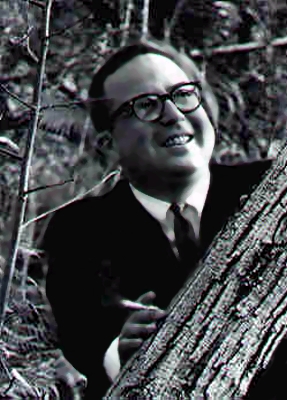 My Son, The Media Figure.
Advertisement:

Although probably best known to modern audiences as the singer of "Hello Muddah, Hello Fadduh (A Letter from Camp Granada)", Allan Sherman (born Allan Copelon, November 30, 1924 – November 20, 1973) was a prodigious talent who started working in the entertainment industry in the late 1940s and kept going strong until his death from emphysema at age 48.

In the course of his career, Sherman turned his hand to scriptwriting, creating, producing and even acting (including a turn as the voice of the Cat of the Hat in the 1971 animated adaptation of the famous Dr. Seuss book, as well as Dr. Seuss On the Loose).

With Albert Hague, he cowrote the 1969 Broadway musical The Fig Leaves Are Falling

, which is notable for two things: the Broadway debut of David Cassidy (later of The Partridge Family), and closing after only four performances. He also guest-hosted The Tonight Show on several occasions, including the night Bill Cosby made his first appearance on the show; he would later be credited as co-producer on Cosby's first three albums for Warner (Bros.) Records.

He was also the author of several books, including the infamous comic novel The Rape of the A*P*E (American Puritan Ethic). He made his greatest impact on TV as creator of I've Got a Secret and as the producer of The Jackie Gleason Show, but it was his numerous albums of song parodies (starting with My Son, The Folk Singer in 1963) that made him a household name in the 1960s.

His son Robert, who inspired him to write "Hello Muddah, Hello Fadduh", was a part of the Goodson-Todman game show staff.