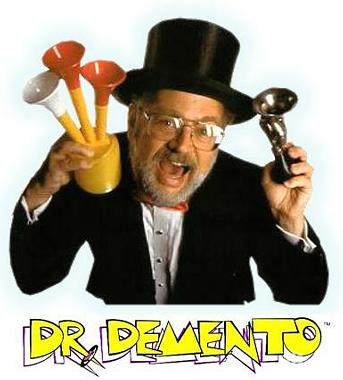 The doctor is in!
Advertisement:

Dr. Demento (AKA Barret Eugene Hansen, born April 2, 1941) is a disc jockey and ethnomusicologist who achieved fame and/or infamy with his long-running syndicated radio program which features strange and bizarre novelty tunes of every type and description. Along with reviving popular interest in performers such as Spike Jones and Tom Lehrer, he introduced "Weird Al" Yankovic to the world, which is pretty much a lifetime achievement in itself. Other performers often associated with his show include Da Yoopers, Napoleon XIV, Trout Fishing In America, Ivor Biggun, and The Great Luke Ski.

The show continues to air weekly via the Internet, and can be found here.

He is reportedly one of Bart Simpson's arch-enemies. Off the air, he has an extensive knowledge of music history, and has written articles, essays, and liner notes on a wide variety of music subjects.

Tropes associated with the good Doctor: