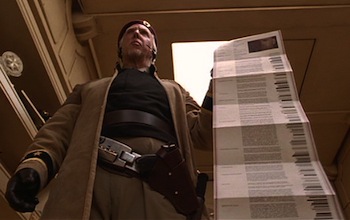 Korben Dallas is qualified to use a large variety of weapons and vehicles.
"Would ya look at all that stuff..."
— "Weird Al" Yankovic, Just before he reads off from a long list. "Hardware Store"

A comedy trope where a person rattles off or displays an absurdly long list of things. For example, someone goes into a shop and asks for a sandwich. The person at the counter asks what type they desire. The customer asks what they have available. Cue the person behind the counter running off a huge list of variations on sandwiches. Might make the character start longing for Freedom from Choice.

If the list is actually spelled or read out to the viewer, it becomes an Overly Long Gag. For added comedy, the list will often contain one or more of:

Parodies of the second type of "Side-Effects Include..." are generally a kind of Long List.

A slight variant is to present the list as a visual gag rather than an Overly Long Gag: a character might present a document containing a "small list of suggestions" which soon unfolds itself all the way down to the floor. Someone unaware of a list's length might also ask for examples and be asked in turn how they want the list sorted, especially if it's a List of Transgressions committed by the person asking.

See the List Song for a musical version, Rhyming List, which well, you know..., and see also Overly Long Name. Amusingly Short List is the exact opposite. Contrast Epic Catalog, which is equally long but quite serious. A Sparse List of Rules may or may not be one of these. This is often used in Oral Tradition. Everything Except Most Things is a subtrope.

Barbie's family has a very long list of rules for her.

Barbie's family has a very long list of rules for her.