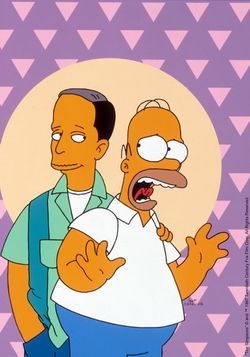 Homer befriends John, an eccentric antiques dealer, only to call the friendship off upon learning that he's a homosexual. He then begins to fear that Bart might be influenced by John and become gay.

Bart organizes a race between the washing machine and the dryer, which ends up with both appliances breaking the gas line. To pay for the steep repair bill (and after an attempt by Homer to mail the gas company a huge jar full of coins from the retirement fund ends with the jar sinking to the center of Earth), Marge decides to sell an old figurine of a Confederate soldier that belonged to her grandmother. The family then goes to "Cockamamies", an antique shop at the mall, whose owner John (voiced by B-movie director John Waters) tells them the heirloom is actually a decorative whiskey bottle from the early 1970s, but nevertheless takes it, as his store is full of campy merchandise, ranging from an issue of TV Guide that belonged to Jacqueline Onassis with Laverne and Shirley on the cover to a 1950s-style sci-fi board game. Homer takes a liking to him and invites him over to their house, where John is entertained by the camp value of their possessions, although Homer seems unaware of what John's campy demeanor implies.

The following morning, Homer is told by Marge, in no uncertain terms, that John is gay, a revelation that truly shocks him, as he thought he didn't act flamboyant enough. While Marge and the kids continue to socialize with John, Homer refuses to associate with him and begins to fear that Bart might be turning into a homosexual after seeing him sporting a Hawaiian shirt, dancing to "The Shoop-Shoop Song" wearing a bouffant wig and preferring pink Sno-Balls for dessert instead of Hostess chocolate cupcakes. Marge then tells Homer to spend more time with Bart, something he does by taking his son to see a billboard featuring two scantily-clad girls having a pillow fight, which only makes Bart want to smoke... slims. They then go to a steel mill expecting to see manly men in action, but it turns out the brawny-looking steelworkers are very much flamboyant, and that the place also doubles as "The Anvil", a gay disco.

At the tavern, Moe and Barney convince Homer that the world is turning gay, and that the only way to keep Bart straight is to take him hunting. Unable to find any deer (as they have long moved out of the woods), the entourage intrudes on a Christmas village, where they force a tearful Bart to shoot one of the reindeer, but the reindeer soon begin to attack them. They are saved in the nick of time, however, when John brings his Japanese Santa Claus robot and scares the reindeer away. While Moe and Barney are dismayed at the thought of being rescued by a homosexual, Homer thanks John for saving his life and tells Bart he will love him regardless of his choices. Lisa then tells a confused Bart that Homer thinks he's gay.