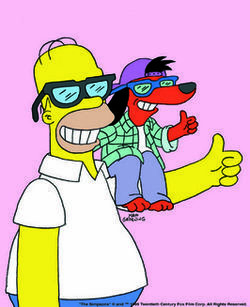 Homer is chosen to voice Poochie, a dog character created to liven up the Itchy & Scratchy show, but the new addition is universally hated. Lindsay Naegle makes her debut as an executive at the I&S studio.

Marge is surprised that Bart and Lisa are not watching The Itchy & Scratchy Show, the two of them pursuing other activities. They are not alone, as I&S producer Roger Myers, Jr. finds out during a conference with Krusty, whose show drops off in the ratings every time the cartoon is shown. Myers decides to do a focus group to find out why the show has lost its popularity. However, the group (consisting on the Simpson kids, Milhouse, Nelson, Ralph and Janey) contradict themselves about what they want for the show (agreeing that the characters should explore real-life issues and also battle giant robots) and an exasperated Myers suddenly rants that kids have no idea about anything.

Bart and Lisa admit that the show is getting a bit stale, so Myers and the higher-ups at the company decide to come up with a new character, a dog to complete the "mouse-cat-dog" trident, much to the discontent of the show's writers, who see Itchy and Scratchy as a "psycho-dramatic duo". "Poochie, the Rocking Dog", as the new character is christened, is devised with all the trappings of a corporate-doctored product, including outdated slang and general indecision about him being a surfer dude or a Rastafarian. The studio also holds auditions to voice Poochie, in which Otto, Troy McClure and Lionel Hutz participate, but are rejected for not having enough of an "attitude". Homer eventually wins the part by acting sarcastically after being initially rejected. He also meets Julie Bellamy, who voices both Itchy and Scratchy, also having played the role of the Roadrunner (but only one "beep") and participates in conferences with the show's rabid fans.

Homer holds a big party at the Simpson household for Poochie's debut, which is done with great fanfare. But the character's in-your-face, Totally Radical style only makes the show worse, leaving the audience disconcerted. Amid the disaster, the studio holds an emergency meeting in which Homer gives some ideas to "improve" Poochie, including more blatant Character Shilling. However, he finds out by eavesdropping that Myers has resolved to kill off the character. In an attempt to save the new guy, Homer deviates from the script (which involves Itchy and Scratchy killing Poochie) and makes a heartfelt speech in-character pleading to keep him, which moves everybody at the room. The finished episode however ends up having Poochie being killed off in the strangest way possible, including a voice-over by Myers and his cel being lifted, with a claim he died on the way to his home planet (with an affidavit from Krusty that ensures the character can't be revived or used in the franchise in any form in the future). Poochie's demise is met with rejoice, while Homer resolves it was just a showbiz folly. At the end of the episode, Roy, a young man that had been living in the Simpson home during the episode, moves out.

As a parody of this trope, The Simpsons suddenly introduce a new character to the family and treat him like he was always there.

Example of:
Remember the New Guy?

As a parody of this trope, The Simpsons suddenly introduce a new character to the family and treat him like he was always there.