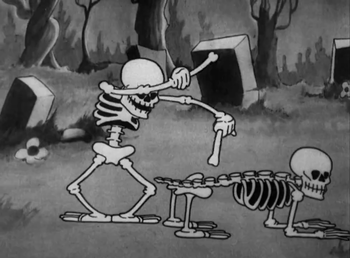 They're silly all the same.
Homer: I share your xylophobia!
Lisa: No, Dad, you mean "xenophobia". Xylophobia would be the fear of xylophones.
Homer: I am afraid of xylophones. It's the music you hear when skeletons are dancing!
— The Simpsons, "Coming to Homerica"note You'd think that Lisa would know that xylophobia is the fear of wood.
Advertisement:

For the proper reading experience, play the music from this video

It seems that a lot of works have featured xylophone music to go along with skeletons. This is especially true wherever skeletons are featured dancing. Often (especially in 1920's - 50s' animation) this would be because a skeleton's rib cage would be played as a xylophone, and as a result, the association between skeletons and xylophones has stuck.

The music is usually played In-Universe by having a character hit a skeleton's bones, often the ribs, with mallets of some sort. It may even be a Skeletal Musician playing their own bones. However, this isn't always the case. As long as it's a scene with skeletons or bones that uses xylophone music in some way, it counts.

The song "Dem Bones" is commonly played, due to it being about skeletons. While most people know it only as a fun Halloween song, it's actually connected to The Bible - specifically, Ezekiel 37:1-14, in which Ezekiel visits the Valley of Dry Bones (no, not those Dry Bones), and prophesizes that God will resurrect the skeletons there (which then immediately happens). The song's bouncy melody and cheerful mood make it perfect for a xylophone rendition.