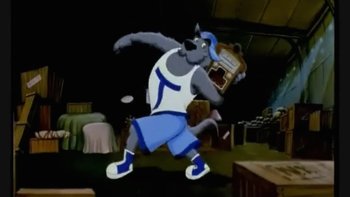 What better way to commemorate the lives lost in one of the world's maritime tragedies than through the use of a rapping dog?
"You know there's something you should know, so I'm gonna tell you so! Don't sweat it! Forget it! Enjoy the show!"
— Fritz, opening the "Party Time" number in Titanic: The Legend Goes On

Basically, things like characters performing brief rap numbers in stories where it isn't the primary subject.

Compare Piss Take Rap and A Wild Rapper Appears!. Not to be confused with Gratuitous Rape.

Lisa does a wicked rap about her science.

Lisa does a wicked rap about her science.