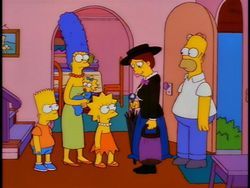 In this Musical Episode and Simpsonsized Mary Poppins parody, a British nanny known as "Shary Bobbins" is hired to shape up the Simpson family after Marge begins losing her hair to stress, only to learn that the lessons she teaches won't stick if she leaves — or stays.

This is the second of four episodes produced by Al Jean and Mike Reiss instead of the current showrunner (in this case, Bill Oakley and Josh Weinstein). Jean would return as showrunner starting in season 13.