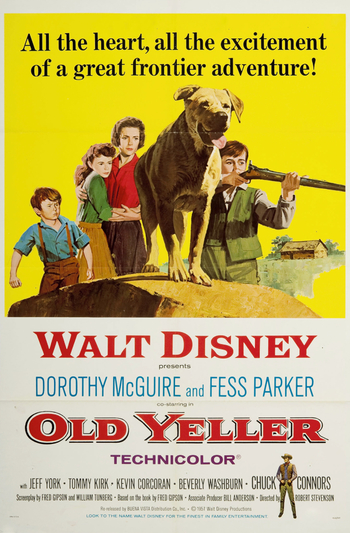 Notice the lack of wolves...
"Old Yeller was a hunter,
A rarin', tearin' hunter.
In any chase, he knew just how to run!
And when he hunted trouble,
He always found it double,
And that's when Old Yeller had fun!"
—from the Title Theme Tune to Disney's Film of the Book
Advertisement:

Old Yeller is a 1956 novel by Fred Gipson about a boy and a stray dog in post-Civil War Texas, adapted the following year into a live-action Disney film directed by Robert Stevenson and starring Fess Parker, Dorothy McGuire, Tommy Kirk, Kevin Corcoran, and Chuck Connors.

15-year-old Travis Coates is the new-made man of the house while his father is away on a cattle drive. Then the wilderness blows a stray "yeller" dog into his life whom he initially distrusts... until Old Yeller saves his little brother Arliss from a Mama Bear (kids shouldn't play with bear cubs). The two become inseparable partners, hunting and facing the dangers of The Wild West together, until tragedy forces Travis to make his hardest decision.

If, by some miracle, you don't know the punchline yet, tread lightly through this page...

Warning, spoilers are ahead, but most people already know what they are.

The novel and Disney film contain examples of: