Film / On the Bowery 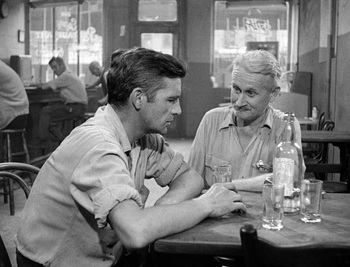 On the Bowery is a 1957 film directed by Louis Rogosin.

Once upon a time, poor people lived on Manhattan Island. Specifically, many of them lived in the Bowery, a run-down neighborhood on the Lower East Side. The Bowery was a haven for alcoholic drifters, mostly men, living desperate existences in filthy flophouses, or in charitable missions, or as this film shows, often sleeping on the street.

Into this sad scene enters Ray, who, like everyone else in the Bowery, is an alcoholic bum. Ray, however, is somewhat younger and handsomer than the grizzled old hobos who make up the bulk of the community. He arrives in town with a little bit of money from laboring, and hopes of a better future, but the lure of the Bowery draws him back into old habits.

Although this film was nominated for an Oscar for Best Documentary Feature, it isn't really a documentary. Rogosin wrote a story and recruited denizens of the Bowery to act it out for him on film. As late as the 1990s the Bowery was still a haven for penniless winos

but gentrification has changed the neighborhood radically in the 21st century.