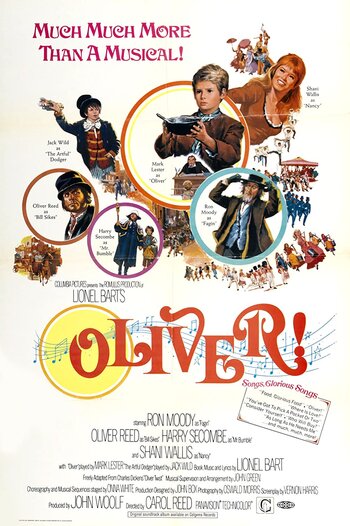 It is an adaptation of the theatrical musical Oliver!, which was itself an adaptation of the novel Oliver Twist by Charles Dickens. The film opens with Oliver (Mark Lester) in a grim workhouse for orphans, where the orphans are fed just barely enough gruel to keep them alive. Oliver makes too much trouble at the workhouse (that is, he asks for more gruel), which gets him sold to an undertaker as basically a slave.

Oliver escapes from the undertaker and eventually winds up in the company of a thief named Fagin (Ron Moody), who runs a gang of young urchins as pickpockets and thieves. Oliver learns pocket-picking from a fellow orphan and expert thief who is named Jack Dawkins but who is always called the "Artful Dodger" (Jack Wild). Eventually the Artful Dodger picks the pocket of a wealthy gentleman, Mr. Brownlow (Joseph O'Connor)—one who has a surprising connection to Oliver.