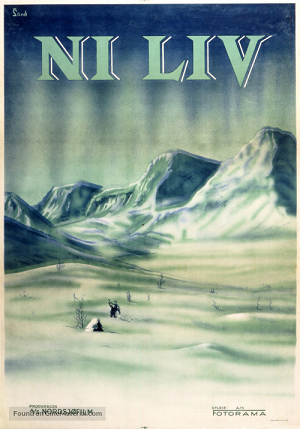 Nine Lives is a Norwegian feature film made in 1957, made by director Arne Skouen. The film is Based on a True Story, and tells the story of war hero Jan Baalsrud, who made it out of Norway alive after a failed attempt to smuggle weapons to the Norwegian resistance movement during World War II. Their primary goal was to blow up the airport at Bardufoss in the county of Troms. All of his crew members were shot, and Baalsrud himself escaped, severely wounded, and developed gangrene in his feet, as well as snow blindness. Nevertheless, he was helped over the border to Swedish Lapland, where he rejoined the resistance fight. The movie tells the story of this hazardous escape. It is considered one of the most epic movies ever made in Norway.

The movie contains examples of these tropes: