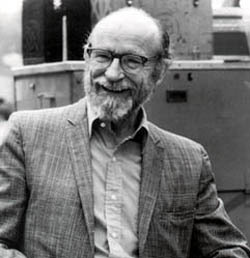 The man who helped make Walt Disney's movie dreams a reality.
"When I’m directing a picture, what I have in mind is a happy audience, enjoying it in a movie house."
Advertisement:

Robert Edward Stevenson (March 31, 1905 – April 30, 1986) was an English director and screenwriter most famous for his work at Walt Disney Productions from between 1957 and 1976. In the years before The Blockbuster Age of Hollywood he was considered to have been the most commercially successful director in movie history, and at the time of his retirement in 1976 he had a record nineteen films among the highest grossing movies ever made.

An engineering and psychology student at Cambridge University, Stevenson became interested in film making during the late 1920s after doing a research assignment that involved film-goers, and made his directorial debut with the 1932 German musical Happily Ever After. Shortly afterwards he went to work for legendary British producer Michael Balcon, directing Jack Hulbert comedies like 1933's Falling For You and 1934's The Camels Are Coming, before moving into more dramatic films such as the 1936 Boris Karloff film The Man Who Changed His Mind and the 1937 adaptation of King Solomon's Mines. In 1940, shortly before the release of what would be his final British film Return To Yesterday, Gone with the Wind producer David O. Selznick offered him a contract to come to Hollywood and start making films there; Stevenson, a pacifist who feared being conscripted to fight in World War II, took the job without hesitation.

His early Hollywood career however, while for the most part critically acclaimed, also produced a number of notable flops. He initially picked up where he had left off in England by directing dramatic films such as the Academy Award-nominated Joan of Paris in 1942 and the 1944 Orson Welles version of Jane Eyre, but these were mostly interspersed between disappointments such as 1940's Tom Brown's School Days and 1943's Forever and a Day. After taking a short break from feature films to (rather ironically) direct the pro-Allied propaganda short films Know Your Ally: Britain and American Creed for Frank Capra and the U.S. War Department, he resumed movie-making after the war with a string of crime noir box office bombs between 1947 and 1952. From 1952 to 1956 he became a television director, doing episodes of shows like Alfred Hitchcock Presents and Gunsmoke.

His work in television caught the attention of Walt Disney in 1957, who hired Stevenson to direct what would become a two-part episode of the Disneyland anthology series centered around Esther Forbes' story Johnny Tremain. Disney was so impressed with the episodes that he released them into theaters as a single film, and afterwards tapped Stevenson to direct Disney's film adaptation of Old Yeller. Yeller was an enormous hit, acting as a Career Resurrection for Stevenson, and after directing three episodes of Disney's Zorro television series he returned to feature film making full time. His subsequent films Darby O'Gill and the Little People, The Shaggy Dog, The Absent-Minded Professor and The Misadventures of Merlin Jones officially cemented his status as a major player not just within Disney, but in Hollywood itself.

Stevenson released his most famous film Mary Poppins in 1964, for which he received his first (and only) Best Director Academy Award nomination; this distinction also makes Stevenson the only person to have directed a Disney film that was nominated for both Best Director and Best Picture at the Oscars. He followed up Poppins with films that included That Darn Cat!, Blackbeard's Ghost, The Love Bug, Bedknobs and Broomsticks and The Island at the Top of the World before retiring in 1976. He passed away in 1986 and was posthumously named a Disney Legend in 2002.

Despite their similar names, Stevenson was not related to the famous author Robert Louis Stevenson. He did however direct a movie adaptation of the other Stevenson's story Kidnapped in 1960.