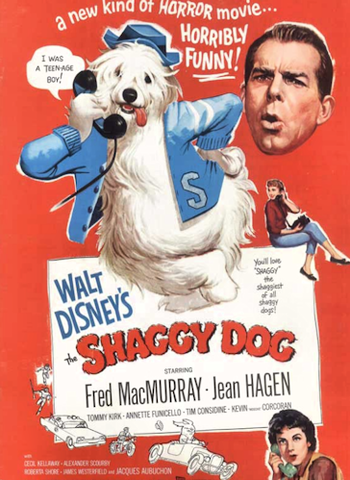 The Shaggy Dog is a 1959 Disney movie starring Fred MacMurray and Tommy Kirk, partly based on a Felix Salten novel called The Hound of Florence. It is notable for being Disney's first live-action comedy.

Life is hard for Wilby Daniels. His father doesn't seem to understand him and fails to appreciate his passions, his brother loves him but is obnoxious, his best friend often takes advantage of his generosity, and his mother doesn't seem to be able to do much about it. But that all changes when a beautiful French girl moves in with her family across the street and Wilby volunteers to go with her to the museum. Upon returning home, he discovers an old ring with a strange Latin inscription on it, and after reading said inscription multiple times, he is transformed into a dog! He seeks the advice of the kindhearted and superstitious museum manager, who unfortunately cannot help him and informs him that until he does an act of heroism, the transformation will come and go at unpredictable times (usually the worst possible times). It's bad enough that his father has a strong hatred for dogs and his brother wants to keep him as a pet, but Wilby makes the horrifying discovery that Francesca's father and butler are actually spies sent to steal a mysterious government secret for the Space Program located in the classified "Section 32" and that Francesca is in danger! Can Wilby and Moochie stop the spies and save Francesca, or will he (and his dad) both end up in the doghouse?

The movie was a huge hit at the time of its original release in 1959. It spawned a 1976 sequel (The Shaggy D.A. where a 40 year old Wilby played by Dean Jones runs for district attorney and his curse comes back), a TV remake in 1994 (starring Scott Weinger, Ed Begley Jr and James Cromwell) and a very loose theatrical remake in 2006 starring Tim Allen.

Not to be confused with a "Shaggy Dog" Story.

The original 1959 film provides examples of:

The 2006 remake provides examples of: