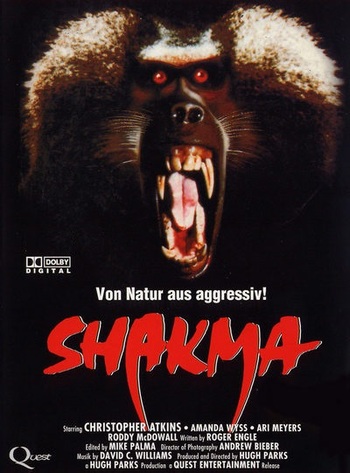 A 1990 Direct to Video horror film directed by Hugh Parks and Tom Logan.

Sam (Christopher Atkins) and his girlfriend Tracy (Amanda Wyss) both work as lab technicians for Professor Sorenson (Roddy McDowall) at a medical research facility housed in a high-rise office building. In particular, it's Sam's job to look after the animals used in Sorenson's work, and he has a particular fondness for a baboon named Shakma.

Along with Sorenson and their co-workers Gary (Rob Morris) and Bradley (Tre Laughlin), they enjoy playing a LARP called Nemesis in the building after hours, and one night they schedule a game after all the other employees have knocked off for the night, inviting their friend Kim (Ari Meyers) to play with them. Unfortunately for them, Sorenson had earlier performed some questionable brain surgery on Shakma, in an apparent attempt to reduce his aggression. It didn't go well, and the experiment apparently got reversed - Shakma instead became dangerously aggressive and started attacking people.

Sorenson orders the baboon destroyed, but Sam injects him with the wrong chemical and simply sedates him. Then thanks to further bad luck, Sorenson's assistant Richard forgets to process the "dead" animal in the facility's incinerator, instead leaving him lying unrestrained on a table. As the five friends and their surprisingly cool boss begin their LARPing adventure, none of them are aware that the sedative is beginning to wear off, and Shakma is starting to awaken...