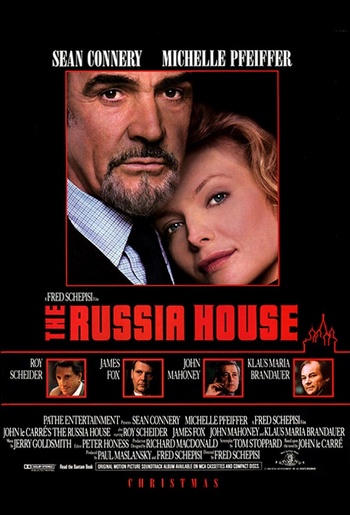 The Russia House is a 1990 film adaptation of the 1989 John le Carré spy novel of the same name, directed by Fred Schepisi.

It's 1988, and the Cold War is coming to an end. With Glasnost now allowing more open cultural exchanges between East and West, British publisher Barley Blair (Sean Connery) - a free-thinker, Russophile, and full-time drunk - takes the opportunity to attend a party thrown by some acquaintances in a country villa on the outskirts of Moscow. While charming the other guests with his radical philosophies and rhetoric, Blair attracts the attention of one of the guests - a mysterious Russian going by the nickname 'Dante' - who carefully observes Blair and later shares an enigmatic political discussion with him in private.

Shortly afterwards, Dante sends his confidant and ex-lover Katya Orlova (Michelle Pfeiffer) to deliver a manuscript to Barley for publishing in the West. However the manuscript ends up falling into the hands of MI6, who quickly realize that it contains a complete breakdown of Soviet nuclear missile capabilities - revealing that the Russians are way behind on the Nuclear Arms Race. With no way to ascertain whether Dante or his manuscript are legit, MI6 operator Ned (James Fox) locates Barley and convinces him to go back to Russia and try to get in touch with Katya for some answers. Barley reluctantly agrees, travels to Moscow to meet with Katya, and quickly falls in love with her.

Of course, things begin to go awry once MI6 passes the manuscript to the CIA. The Americans - seeing a golden opportunity to acquire critical Soviet secrets from Dante - quickly get involved in the affair, forcing Barley to make a choice between his new-found love for Katya and his loyalty to his own country.

There was also a BBC radio adaptation of the book - that version starred Tom Baker as Barley.

The film is notable for being the second (and last) US production to film in the Soviet Union itself.