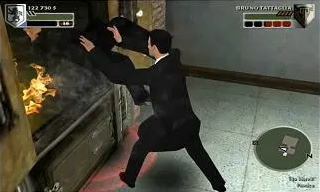 A somewhat baroque means of murder, the killer shuts their victim in a coffin (knocking them out first is optional) and feeds the coffin into a crematorium oven. This both kills the victim and disposes of the body in one fell swoop. Occasionally the killer will opt to dispense with the coffin, or use some other incineration device such as a document burner. This trope can also be easily combined with Conveyor Belt of Doom. Furnace Body Disposal may come into play.

Note that in Real Life this wouldn't entirely work for the disposing of the body part, since cremation alone is insufficient for fully destroying the bones of the body (this being done later by placing them in a special grinding machine). Works great for the murder portion of the evening, though.

Useless trivia: a crematory oven is called a "retort".

A Sub-Trope of Kill It with Fire. Smokestack Drop is a more accidental version. Compare Burn the Witch!.