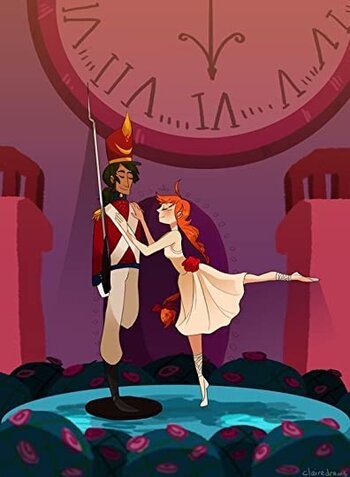 "The Steadfast Tin Soldier" (Danish: "Den Standhaftige Tinsoldat") is a Fairy Tale by Danish poet and author Hans Christian Andersen about the love a one-legged tin soldier holds for a paper ballerina. After several perilous adventures, the tin soldier and his love perish in a fire. The tale was first published in 1838.

Like "The Shepherdess and the Chimney Sweep" (1845), "The Steadfast Tin Soldier" displays Andersen's talent for investing ordinary household objects with life, character, and personality. Both tales narrate romances between household objects but differ in that the 1838 story ends with the lovers joined in death while the 1845 story ends with the lovers living (in fairy tale fashion) happily ever after. Andersen may have taken inspiration for the tale from memories of his few cherished childhood toys.

Though the title has been translated variously as "The Brave Tin Soldier" and "The Courageous Tin Soldier", the story is generally known in the English-speaking world as "The Steadfast Tin Soldier". Interestingly, in some languages, such as French, he's not a "tin" Soldier but a lead one. The tale has been adapted in various media including ballet and animated film.

You can read this here.

"The Steadfast Tin Soldier" has examples of: