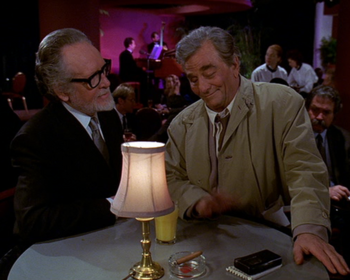 Eric Prince (Patrick McGoohan) is owner of the Haverland-Prince Funeral Home. Eric receives a call from gossip reporter Verity Chandler (Rue McClanahan), his former lover who requests a private chat. She assures him that his next funeral service will not be interrupted but that they'll both have their own (figurative) funeral service in private. As it turns out, Chandler is going to go public about some skeletons in Prince's closet on the show Hollywood Heartbeat and wants to tell Prince in person to rub it in. Unfortunately for her, she chooses to gloat to him in his morgue where there are no witnesses observing them.

Chandler recaps how Prince, an immigrant from England, tried acting in Hollywood. The acting bug didn't work out for Prince, so he got a job in a Hollywood mortuary. The mortician, Arthur Haverland, took a liking to Prince, who became his protegee and business partner. Along the way, Prince took advantage of his job and examined bodies for telltale traces of confidential affairs to sell to Chandler, who also became Prince's lover. Eventually, they broke up. Today, Chandler wants revenge for being dumped unceremoniously, so she boasts that she is revealing how Prince stole a diamond necklace from Dorothea Page's body to buy into a mortuary and finance even more mortuaries. Chandler reveals that she hasn't "told a soul" and will be broadcasting on Sunday at 8:00, headlined "Grisly Undertakings on Sunset Boulevard". Prince, on the spur of the moment, picks up a mortician's tool and, when Verity turns her back, bashes her in the head with it.

Prince loads Chandler's body into his cremation oven, incinerates it, and gives the ashes to the family of a war hero turned actor named Chuck Houston. Prince then drives to Chandler's home, deletes the story about him on her computer, replaces the story with a fake by setting the computer clock back to an earlier time and stages an abduction/robbery to make it appear that Chandler was taken hostage.

When Columbo investigates Chandler's home, it is discovered that Chandler failed to feed her puppies, which doesn't add up because it seems highly unlikely that Chandler would forget after arriving home. Columbo finds it puzzling that effects (from the night before), such as an alcohol glass with evening-shade lipstick, were left out when Chandler was apparently staying home for the night to type a (forged) document and would have no need for cosmetics, suggesting she never actually made it back home the next night. It is also later discovered that Chandler's pager also cut out at a specific time, suggesting it was destroyed.

Fourth and last Columbo episode in which Patrick McGoohan appeared as the killer. In fact it was McGoohan's last on-screen role, period, although he had a couple of voice acting gigs before his death in 2009. His daughter Catherine appears as Eric Prince's assistance, Rita.