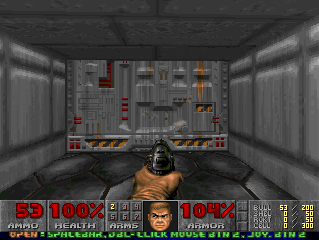 "We then exit the temple, and I swear the Egyptians used the same sound effect for their doors as Doom does."
— Ross's Game Dungeon, reviewing Maabus

The sound effect used for doors opening and closing in the game Doom has rapidly become one of the Stock Sound Effects and is one of the few sound effects that non-movie fans will be able to identify right off. The reason for this is quite simple: The sample comes from a sound archive developed by the Canadian-based Sound Ideas, which is a series of stock sounds — explosions, screams and so on — that can be licensed out to filmmakers. Thus, the makers are not ripping off Doom; they just happen to have used the same sound files that were used in that game.

Many films use the same sound effect libraries; the only reason this one is obvious is that gamers of a certain age have heard it thousands of times over...

Mac users of the correct age might likewise recognize Marathon elevators in a lot of media.

Can be listened to right here.