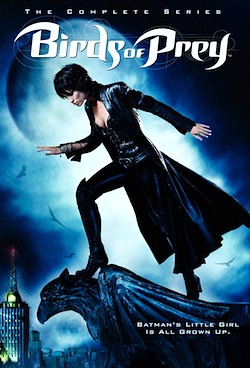 If you want to, I can save you...
Advertisement:

By 2002, The WB had bounced back from the loss of its flagship series, Buffy the Vampire Slayer, by launching Smallville, chronicling the life of Clark Kent as he grows into becoming Superman. Seeing its success, producer Laeta Kalogridis decided to explore the life of another DC character. Since a young Man of Steel was proving popular, it made sense to explore his darker counterpart. However, since the topic of a live-action Batman was still an anathema due to the failure of Batman & Robin, the choice was made to instead loosely adapt the popular Birds of Prey comic series, focusing on Barbara Gordon (Dina Meyer) as she deals with life following a personal tragedy.

Premiering October 9, 2002, and with co-production handled by Smallville co-producers Tolin/Robbins Productions, Birds of Prey is set in the city of New Gotham, twenty years after events heavily influenced by The Killing Joke, where the Joker shot and paralyzed Barbara. The series' backstory also features elements visually inspired by Batman Returns, namely the Batsuit and Catwoman's outfit.

The series established that Catwoman was killed in the Joker's sadistic crusade and something went down where he was captured and soon after Batman left Gotham. The series focused on the crime-fighting escapades of Helena Kyle (Ashley Scott), daughter of Batman and Catwoman, as per her pre-Crisis backstory; Dinah Redmond (Rachel Skarsten), a teenage runaway and estranged daughter of Black Canary; and Barbara, who now fights crime via Mission Control as Oracle. Most of the series revolved around the emergence of Meta-Humans, people who have extraordinary abilities. Helena and Dinah themselves are meta-human, Helena having enhanced senses and cat-like agility and Dinah having growing telepathic/telekinetic powers.

The Big Bad was Harley Quinn (Mia Sara), whose connection to The Joker was a rumor and she still operates as a mob leader while posing as a respectable psychiatrist. Alfred Pennyworth (Ian Abercrombie) is maintaining Wayne Manor and offers the Girl Posse help and advice from time to time, with some hints that Batman/Bruce Wayne is still keeping tabs on them. The By-the-Book Cop Jesse Reese (Shemar Moore) slowly starts to see the bigger picture of the Gotham underworld and finds himself attracted to Helena.

It was a modest success at first, riding the popularity of Smallville, but it was somewhat ahead of its time, which coupled with the still dubious feelings about any live-action Bat media led to rapidly dropping ratings and its cancellation on February 19, 2003, for a total of 13 episodes. However, unlike most instances, the ax fell early enough to where the show actually resolved its Myth Arc.

It was announced in September 2019 that Ashley Scott would reprise her role as Huntress in the Arrowverse's adaptation of Crisis on Infinite Earths, alongside many other actors from former DC television series. Her appearance also featured an uncredited voice cameo by Dina Meyer; surprisingly, Rachel Skarsten was absent despite being a regular in one of the shows involved in the crossover.