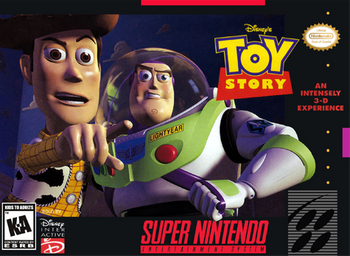 Toy Story is a 2D Platform Game based on the Disney/Pixar movie of the same name, developed by Traveller's Tales and released by Disney Interactive for the Sega Genesis and Super Nintendo Entertainment System in 1995, and the PC in 1996. A stripped-down Game Boy port developed by Tiertex was also released, and there was also an odd bootleg Famicom version, which is a stripped down conversion of the original, only featuring the first few levels from the original game it was based upon.

The game stars the pull-string cowboy Woody, and its levels follow the movie's plot through Andy's room, Pizza Planet (including the Claw Machine), Sid's room and on the road chasing after the moving van.