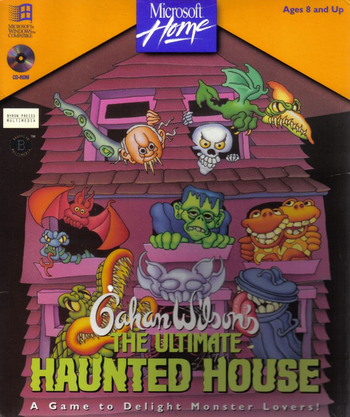 Gahan Wilson: So nice of you to come and visit. Make yourself at home. Just be sure to leave before 13 o' clock, or else... you'll have to stay here forever!"
— Gahan's introduction to the house
Advertisement:

Gahan Wilson's The Ultimate Haunted House is a darkly comedic horror-themed Adventure Game for PC and Mac released in 1993 and 1994 by Byron Preiss Multimedia and published by Microsoft Home.

The player is dumped into a Haunted House and told to find 13 keys by 13 o' clock, or else they will have to stay in the house forever. Along the way, the faceless protagonist will pick up items, encounter creatures both horrible and helpful, and all in all search the eerie mansion to uncover the keys in time.

(door rises up from the wall)
Gahan: NO!! COME BACK BACK back back....