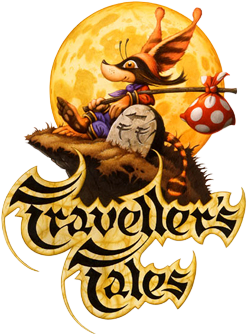 Logo from 1995 to 2004.
Traveller's Tales is a video game company based in the UK and founded in 1989 by Jon Burton. Traveller's Tales' earliest games were published by Psygnosis. Since 1993 they have mostly concentrated on Licensed Games, primarily related to Disney and LEGO properties, though they have also developed a few installments of long-running video game franchises such as Sonic the Hedgehog and Crash Bandicoot.
Advertisement:

Traveller's Tales was acquired by Warner Bros. in November 2007, though it continues to operate under its own name.