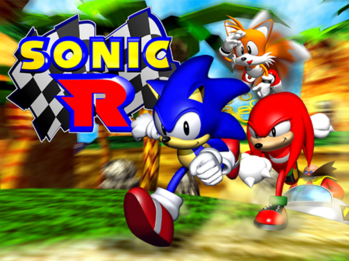 Race for the goal with Sonic and his pals!
"Everybody's Super Sonic Racing, try to keep your feet right on the ground..."
Advertisement:

Sonic R is a Racing Game starring the spiky blue speed demon and his friends, developed by Traveller's Tales, who also made Sonic 3D Blast, and was released in 1997 for the Sega Saturn and later for the PC.note The PC version has a unique feature in the form of seasonal effects. In 2005, it was re-released for the Nintendo GameCube and PlayStation 2 as part of Sonic Gems Collection, which is based on the PC version of the game. It was also made available for download on GameTap for a short time in 2007.

The game is known for its Eurodance soundtrack by Richard Jacques with songs performed by British singer Teresa Jane Davis. Like many CD-based games of the era,†  Including all '90s-era iterations of Sonic CD and the Saturn/PC port of 3D Blast. both the Saturn and PC versions can be played in any standard CD player, in case you want to listen to the music without having to play the actual game.

This game is notable for being the final game of Sonic's "Classic" Era, with Sonic Adventure coming out about a year and a half later. It is also the only fully 3D console game wholly featuring the original character designs.note Sonic Jam and the Saturn version of Sonic 3D Blast only have small sections in 3D, while Sonic the Fighters did not receive a Saturn port (although it was also ported to Gems Collection years after the fact). While Sonic Generations and Sonic Forces would bring back the classic designs of some characters, this is the only game to have the entire cast of them.