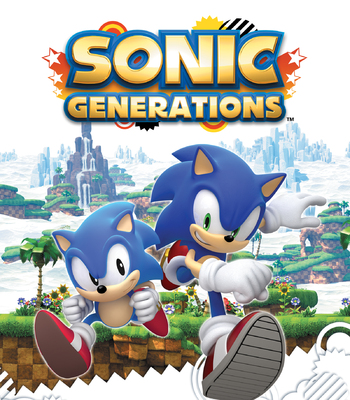 Sonic Generations is a main series title in the Sonic franchise, released in 2011 for the PlayStation 3, Xbox 360, the PC (via Steam), and the Nintendo 3DS to commemorate Sonic's 20th anniversary. The HD version, subtitled "White Time-Space" in Japan, is the main version of the game, while the 3DS version, subtitled "Blue Adventure" in Japan, is a Reformulated Game with some aspects unique to it.

The story is that Modern Sonic and his friends are celebrating his birthday when the "Time Eater", a mysterious new enemy, crashes the party and sends them back to the past, where Sonic meets his younger self, Classic Sonic. They both discover that the world is losing its color, their friends have been petrified, and disruptions in the timeline have caused places from their past to be frozen in time. Both Modern and Classic must team up to stop this mysterious enemy, rescue their friends, restore color to the world, and fix the timeline. Along the way, they fight familiar foes, including their rivals Metal Sonic, Shadow, and Silver.

Classic Sonic's gameplay takes heavily from the Sega Genesis installments of the series: 2½D gameplay with a focus on momentum-based platforming and maintaining a top speed by taking the optimal route through the stages. Modern Sonic, meanwhile, varies depending on the version: the HD version plays like Sonic Unleashed's daytime stages and the Wii version of Sonic Colors, with Sonic boosting through stages that switch between 3D and side-scrolling segments, while the 3DS version is entirely side-scrolling, more akin to the Sonic Rush series and the DS version of Sonic Colors.

The two Sonics' journey takes them through three eras: Classic, Dreamcast, and Modern. The HD and 3DS versions have different levels and bosses: the only shared aspects are the famous Green Hill Zone from Sonic 1, the rival battles, and the Final Boss.

The stages and bosses are:

The PC version of Sonic Generations is well-known for being one of the most enduringly popular games in the series, with strong sales

and an active modding community over a decade after its debut. In 2017, two similar games were released in the Sonic series. While not direct follow-ups, both borrow aspects from Generations and celebrate the series' 25th anniversary — Sonic Mania is a retraux side-scroller that focuses on revisiting classic levels, while Sonic Forces features Modern and Classic Sonic side-by-side again, along with a brand new gameplay style in the form of the Avatar.

I guess we have to trope like there's no tomorrow, or there won't be a tomorrow!

"Hey, Sonic! Enjoy your future, it's gonna be great!"
Feedback