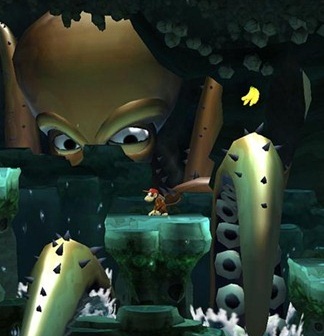 Now even the background attacks you.
Advertisement:

Straddling the line between "style" and "genre," 2½D is an uncommon but generally recognized term. While there is some ambiguity among gamers as to what, exactly, constitutes "2½D," it is most commonly used to refer to one thing: Two-dimensional, side-scrolling platformers with some three-dimensional elements, be they just graphics or interactive objects.

In a "traditional" platformer, players can only move in four directions: jumping up, falling down, and walking left and right. That's two dimensions (height and length). 2½D games mess with this formula by adding a third dimension, but not dedicatedly. Players can still only control their character in four directions (generally), but there are some options as to where the extra half a dimension comes from:

In older material the term 2.5D is sometimes used in reference to 3D games that use 2D surfaces, with various graphical tricks used to make it seem 3D (e.g. Doom), also called pseudo-3D. This specific usage died with the Game Boy Advance, the last well-known platform to use this technology, but it overlaps with the sense of only moving in two dimensions. The term can also be used for Isometric Projection or Sprite/Polygon Mix.

See also Background Boss, which may or may not utilize 2½D characteristics.

Let's not dwell on the confusing terms that are sure to arise for 2½D games on the stereoscopically-3D Nintendo 3DS.

Compare Fixed Camera. Do not confuse with the 2.5D theatre phenomenon, in which Japanese stage shows and musicals attempt to emulate the visuals and atmosphere of anime/manga/video games.

Examples of games that are 2½D or use 2½D segments: