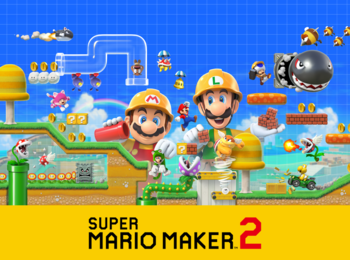 Super Mario Maker 2 is a Game Maker released for the Nintendo Switch and the direct sequel to Super Mario Maker. Continuing from where the previous game left off, 2 takes everything from the original and offers even more zany creation options and tools to pack on the course making chaos, including the new Super Mario 3D World game style, new enemies, terrain, a story mode, multiplayer, and of course, slopes!

In the Story Mode, after finally finishing work on Princess Peach's castle, Mario and company are sent back to square one when Undodog jumps on a Reset Rocket and wipes it away. Construction chief Toadette sends Mario out to complete anonymous odd jobs to collect coins to fund an even better castle, which her Toad employees are working on. Mario plays through many pre-made courses along the way, even taking jobs from the various menu elements of Course Maker.

Sequel to the much-beloved Super Mario Maker, this one adds new features, biomes, and styles.

Sequel to the much-beloved Super Mario Maker, this one adds new features, biomes, and styles.