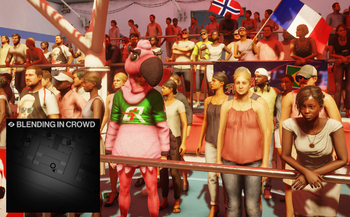 Blending into crowds has never looked so magnificent.
Advertisement:

The classical Stealth-Based Game paradigm is "hide and be quiet to avoid detection by the AI". Much of the classical stealth gameplay revolves around finding cover and shadows to hide in, walking slowly on noise-muffling surfaces, and memorizing guard patrol routes. If neutral, non-guard NPCs are present at all, they will be rather sparse and their main function is to summon the actual guards if they spot anything suspicious.

An alternative approach to stealth gameplay is to instead situate it in levels densely populated by neutral NPCs, allowing players to escape detection by the guards by pretending to be one of them: instead of cover and shadows, the player now has to look for groups of neutral NPCs to blend into; instead of managing the noise you make, you look for disguises and perform Artificial Atmospheric Actions (and avoid doing anything others are not doing) to make yourself inconspicuous; and rather than patrolling the level, most guards are stationary, and you must instead learn how the neutral crowds flow in order to get to wherever you have to go undetected.

Lost in a Crowd is one way to hide from pursuers, although blending-in gameplay does not necessarily involve crowds of NPCs: this trope also covers blending in with the guards themselves (e.g. by obtaining and wearing their uniform), as well as with the current environment by imitating the appearance and behavior of NPCs typically found in it, even if none are present at the moment. Also included are team-based multiplayer games where players have gameplay means of blending in with the opposing team and of detecting impostors in their own ranks.

Compare and contrast Social Deduction Game which is a multiplayer genre where players must blend in with and deceive other human players, rather than the AI.